Agile is built upon teams of highly motivated individuals that leaders support to the best of their abilities, and they trust their teams to get the job done.

AUTONOMY IS A KEY MOTIVATOR

Dan Pink, the writer of the book titled “Drive”, recognizes through numerous studies and observations that human motivation can be grouped into three key areas; autonomy, mastery, and purpose.

It comes with no surprise that autonomy is a major motivator for a company’s workforce, and when autonomy is threatened or perceived to be removed then the result is likely to be a demotivated workforce and lower overall engagement.

AGILE DEPENDS ON AUTONOMY, BUT AGILE AUTONOMY IS HARD TO SCALE

Agile frameworks give more autonomy back to teams, but they are notoriously difficult to scale. When an organization starts working with multiple teams on one product, where teams and processes need to be aligned in order to achieve consistency, speed, and quality, how can we ensure that teams stay motivated, and continue to feel autonomous. As an organization we will need to make changes to the process often as we strive to improve the system; the team’s process and ability to deliver working software. So what is the most effective way to make changes that affect multiple teams, and still have them feel autonomous and motivated?

It is pretty common for leaders to leverage a small group of key influencers to provide them with insight before making a final decision – but they often make decisions without including everyone else because it’s faster. This kind of decision making is called Issuing an Edict. The decision has already been made so you either agree with this decision, or you quit. In other words, you must comply. As a member of a team, you don’t have any input or control over this type of decision. If you or your team are affected by this decision in any negative way, what choice do you have? Would you feel accountable to find a better solution? Would you feel empowered to suggest alternatives? Over time, this type of decision making and removal of autonomy creates a system of people that do not try to improve the system. Unfortunately, when leaders get into the habit of making these kinds of decisions, it can cause a downward spiral in motivation.  An added problem is that leaders often may not have all the critical information, and the decision they make may hurt the system more than help. This is the unintended consequence I try to avoid with multi-team or organization wide decisions.

INCLUDING EVERYONE IN DECISION MAKING IS MORE POWERFUL

When leaders involve everybody in a decision, everyone feels heard. As a leader there are generally three different decision making methods to reach a decision across larger groups or multiple teams:

Both decision by consensus and consent are slower than issuing an edict. However, the decision will have more buy in and will better support workforce empowerment, autonomy and motivation.

SO WE NEED TO BALANCE SPEED AND BUY-IN TO DECISIONS

YES!! An idealist would say, all decisions need to be made by the teams – but a realist would recognize that it’s simply not possible for everyone to get together every time and make a decision. The organization would improve far too slowly this way. Speed of decision making is critical for an agile organization – but so is a team’s engagement and motivation.

A more balanced approach to decision making is more effective – and you will have to use your judgement to find the right balance for your organization.

The below framework is designed to help you find the right balance, for each decision your organization needs to make. 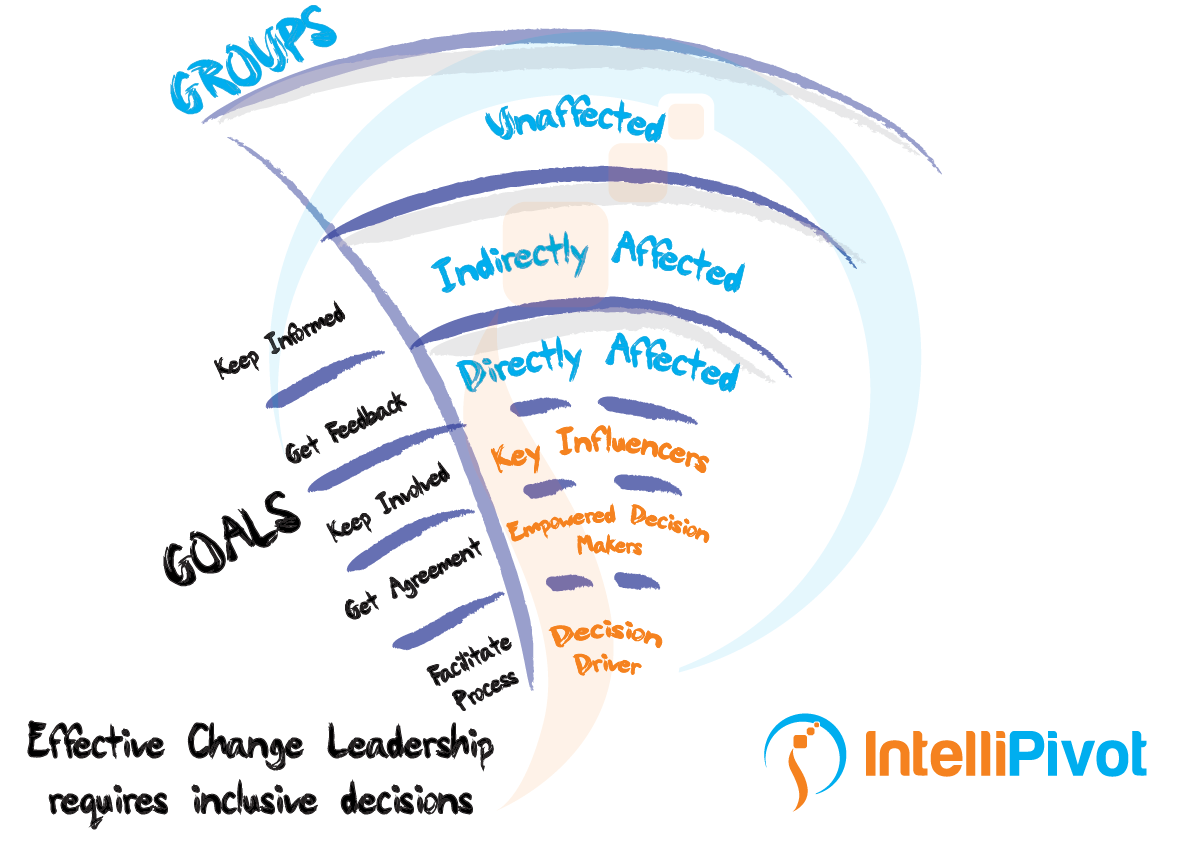 THE GROUPS
These are the main groups to consider when making a decision for change.

Now that we’ve defined these groups, let’s look at the process.

There you have it. Try this framework to get more involvement while also making quicker decisions. Let me know what you think in the comments below.

1 thought on “Using the power of Inclusive Decision Making”